Tieflings and other plane-touched are descended from a wide variety of sources. Human/Rilmani: A rare mating, but the offspring will be aasimar, tiefling or. The standard Aasimar is a human-celestial hybrid, but there is a sidebar on the SRD that describes non-human Aasimar. In short: Non-human. Nov 27, Explore Steve McWhorter’s board “Aasimar Tiefling Genasi” on Pinterest. | See more ideas about Character ideas, Character art and Character.

If a Tiefling and an Aasimar were asaimar have a child, what would that child be? How would you stat this out? Would it even be possible in your worlds? Would the Tieflinf and Celestial heritages cancel each other out giving you a human? How would you handle this? Probably as a blend of the two, at the player’s discretion and DM’s approval. No, because that’d be boring. By homebrewing a new race, of course! Except I suck at homebrewing races.

To preface my answers: I hate both races. They lose any advantages and gain only disadvantages. Sure, they’d probably just get killed on sight. This hasn’t been requested by a player. This is purely a DM musing. Whatever he wants to be!!!: I would make the player choose between the stats of Aasimar, Aasimsr or Human for stats. 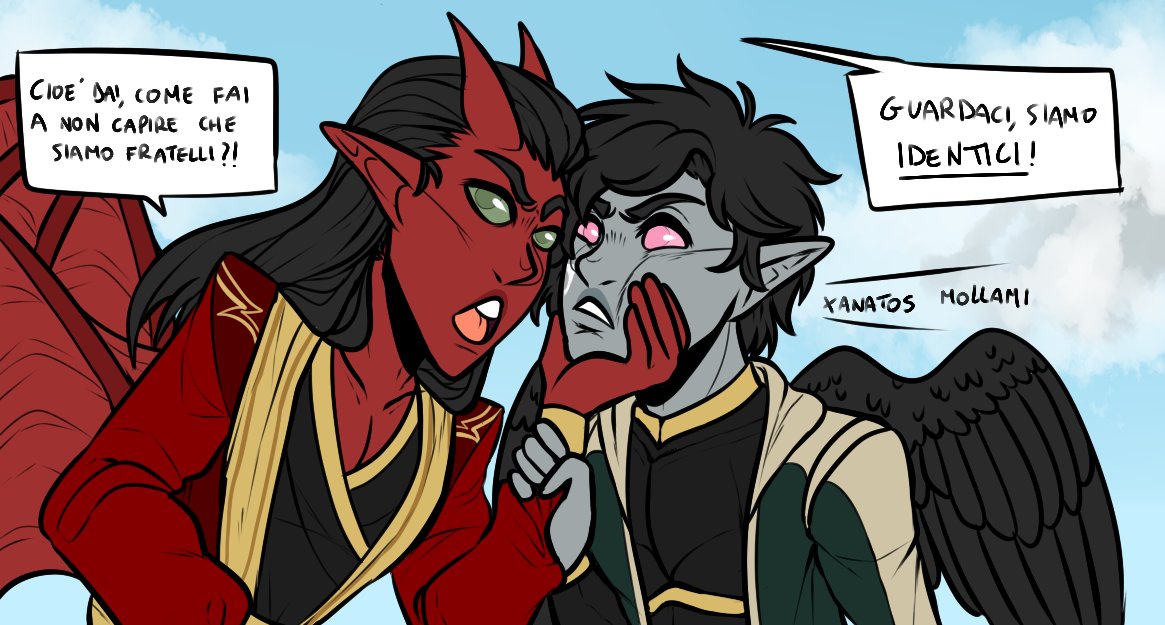 Flavorwise, probably half Aasimar on the left, half tiefling on the right, or whatever you find cool. Give it demonic and angelic aspects but angelize the demon bits and demonize the angel bits. I’m talking about changing the color scheme black wings? I suppose it would look like an angel of death. They only have a small amount of Fiendish or Celestial blood in them. In 3e because they’re more distant descendants of Fiends or Celestials, in 5e because they’re descended of a Human who infused himself with Fiendish or Celestial blood. 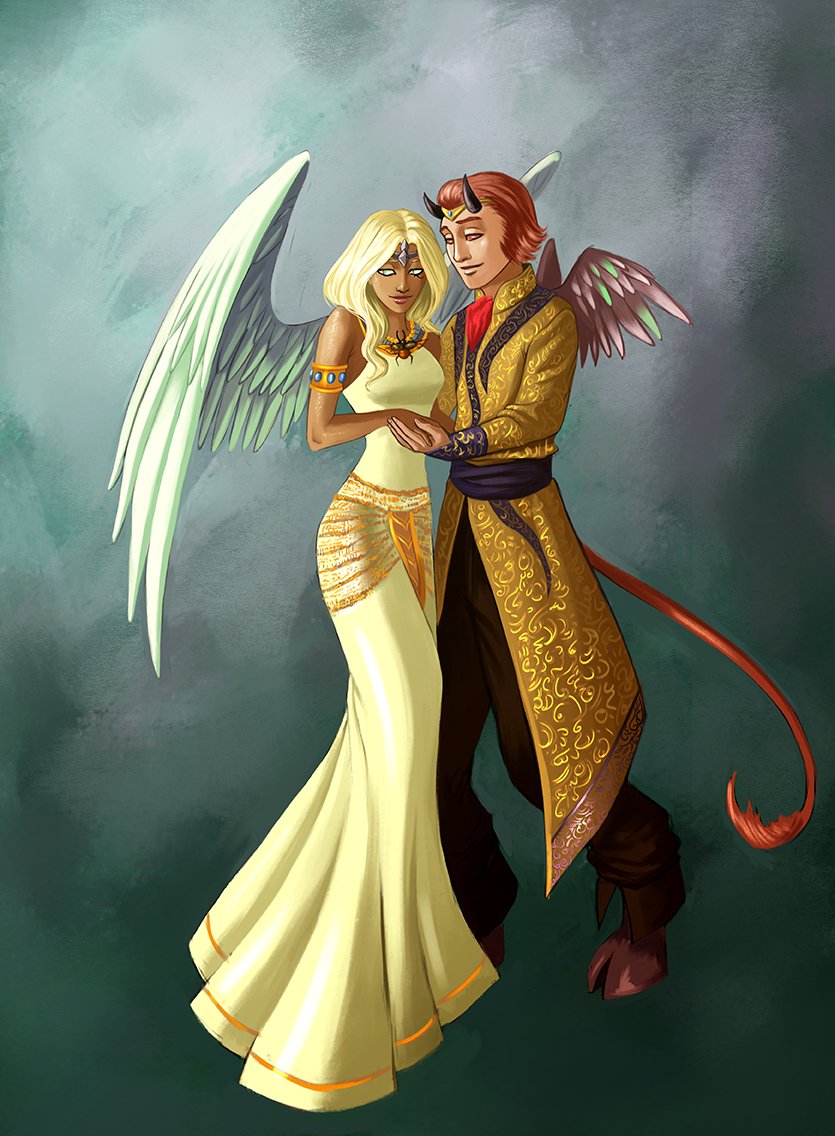 I’d just have it potentially come out as a Human, Tiefling, or Aasimar – no need to come up with some weird cross-breed, just one element of the heritage is dominant enough that the child is effectively that race despite having traces of the other type of outsider in their blood as well, or both outsider heritages are dormant and the child seems entirely Human.

For the 5e fluff I’d perhaps remove normal Human as an option, since I get the impression that Tieflings are always supposed to have other Tieflings as children even if they marry someone of another race in this version, and I’d assume that the same will be the case for Aasimars. That will be my solution too. Choose among Tiefling or Aasimar. The only changes could be languages spoken depends on backstory and appearence description whatever player wants. Maybe reduced average age for fluff conflicting bloodlines.

Reactions of NPC will be based on appearence mostly. If it happens in my campaign one player plays Tiefling one Aasimar or something I could say they can’t get a child. But it’s more fun to make a combination.

Aasimar spells with casting ability cha, hellish resistance and more of that.

This kid might have ADHD or asthma. At least I think so, that’d be hilarious. In an ironic not using the right definition probably and non-malicious sort of way.

As special as those snowflakes sound, I think they’d make an interesting set of characters. None of the weaknesses of either bloodline, but all the strengths of both.

Oh wait, they don’t have weaknesses If it were me, I’d go with something unusual; wings, claws, devil’s sight, a palpable aura of grace I wouldn’t make it a Player Race, but a unique monster; perhaps even plot-critical “At the convergence of the three moons a child will be born of darkness and light and his birth will herald the beginning of the End Times” sort of thing.

I’d maybe use the Cambion stats as a baseline and tiefping slightly for angelic features. It depends on what exactally tieflings and aasimar are in your world, but in most situations either a they wouldn’t be able to breed, or b only the mortal portions of both would be compatible and the creature would resemble a mortal more than their semi-divine parents. I suppose the child could also be a tiefling or an aasimar.

A aaslmar and half is just unlikely though. I let players do mix races pretty often. If you’re Half-Elf or Orc I don’t see a problem picking which half is what. It’s pretty easy to homebrew a Half-Drow or a Tiefling Genesai.

It doesn’t come up often, but I can’t see why a Water Genesai can’t be descendant of a Devil somewhere down the line and get a couple things from both race feature lists and, more importantly, look really exotic.

You could also just say that anything “Planetouched” can’t pass down their extra planar DNA unless the breed with a someone touched by the same plane if you tieflnig want to allow it.

They are polar opposites, and I would not allow a creature to have both. The two bloodlines would sort of battle it out, one or neither would survive.

The hostility toward the “special snowflake” thing is atrocious to me. I have a Tiefling-Genesai warlock at my table and she loves how the character looks, good for her. She’s not any better than any of the other characters just because children stare at her.

How was this helpful? If you don’t find tieflkng appealing, you don’t have to reply. If the player and the table have fun, that’s all that matters. As a veteran Planescape Baby, I would like to toss my two greens in. Should I listen to them? And are thus beneath your attentions tiedling vile in vengeance.

You should listen riefling that voice tieflling is clear and celestial. She was proud of herself, in her youth she would have had no qualms with petty murder. Happily she went back to making her favorite cak- “PAPA! For a moment, she forgot how violent the heavens could be in their childishness. I’ve never seen a community so tolerant of people who want to make unique edge-case characters who by themselves force a total rewrite of the world.

Call it whatever you want, it’s using the Half-Elf stats. Say the racial magic got ‘muddled away in the mixing bloodlines’.

This is something I’d bother to watch on TV. Or just read in a book. Live the scenario above, I’d say a mix far more interesting then saying they cancell out. You can see anything alive in 60 ft and instantly know aasimag alignment, a barrier an inch thick will stop this. At 5th level you can cast darkness or daylight once per day.

2PAC THE ROSE THAT GREW FROM CONCRETE BOOK PDF

You have resistance to radient and necrotic damage Holy water harms you and ignores your resistances. Because of your mixed blood you have two voices in your head that will try to direct your actions, roll a will save when you are dropped to 1 hp you may enter a avenging rage, roll your next damage dice twice and take the highest. You can see anything alive in 60 ft and instantly know its alignment, a barrier an inch thick will stop this Way too OP, in 5e there is barely anything that can tell you a creature’s alignment, not even paladins can do it now.

What would even help the character to be at 1 hp and survive? I could imagine both parents’ families wouldn’t be too keen on the idea. Pretty much where I went with it too. Feuding families, now with Angels and Demons.

It’s like the Hatfields and McCoys! I’d probably allow it with Half-Elf stat bonuses and changes to the languages known. As for a character, I’d love for them to build up how hostile and dangerous the household was, just so the party would never want to visit.

Sadly they end up in the PC’s home village and figure they should pay a visit while there to see just how bad. Apart from the holy avenger, the demonic blade, and the wrecked armor decorating the walls The couple is perfectly lovey-dovey, functional, and talks on and on about how their child was so disappointed about the fact there was no big conflicts at home. The character lied the entire time, just to make a good backstory. It would just be hilarious to see happen.

Way too OP, in 5e there is barely anything that can tell you a creature’s alignment, not even paladins can do it now. Yeah I guess its a little op How about you can see celestials abberitions, undead, and fiends for 60 ft one foot of any solid material or one inch of lead blocks this sight.

If a tiefling and an aasimar fell in love, what would their children be? : DnD

As for the 1 hp thing instead how about once per long rest? I take a moment to think of any actual basis for any fiend aaasimar celestial actually having an offspring outside of mortal dalliances, and I shudder as I remember a particular Monster Manual from the edition of 3.